Culinary Adventures in a College Kitchen

Thank you all for your kind get-better-soon comments! You guys are the best!  I called Doctor Dad (or as I commonly call him, my personal Web MD) and he put me on a round of antibiotics.  I don't want to jinx anything, but I feel like I've finally turned the corner.

This weekend I had friends over for the Oscars and I planned on doing my usual thing and making dessert.  All week I thought about different treats and then settled on sugar sandwich cookies.  I'd bake up sugar cookies, sandwich some buttercream between them and roll the cookies in sprinkles.

Are you guys excited yet?

I was.  I don't think I've ever been as excited to make a cookie as I was about those.  There would be lots of sprinkles and leftover buttercream that I would force myself to eat because waste is the devil's game. Unfortunately, I neglected to remember that I am pretty much incapable of making sugar cookies (why???) and when the entire batch ended up in the garbage with an hour until company arrived, I had to do some quick thinking.

I had been defrosting puff pastry dough to make some caramelized onion tarts.  I quickly nixed that idea and settled on an apple tart using my last two apples in the apartment. 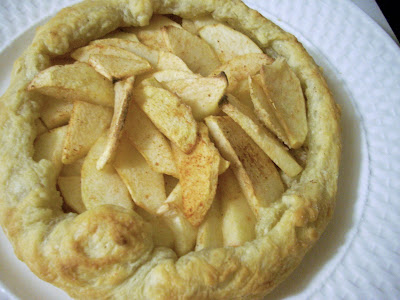 In classic Liz fashion, several things went wrong when I made this tart.
The puff pastry dough teared like a mother-trucker.
I accidentally poured cumin on the apples instead of cinnamon.  (Remedied with a quick bath)
I decided to roll out the dough ON the baking sheet.  (Bad idea)
Miraculously, it turned out and was edible.  I absolutely loved this because even with my spazzing out and having to re-do every step about three times, the tart came together in about fifteen minutes.  I served this with some vanilla ice cream and it was delicious.  Make sure to serve it warm and the ice cream gets all melt-y.
Good stuff, folks.
Rustic Apple-Almond Tart 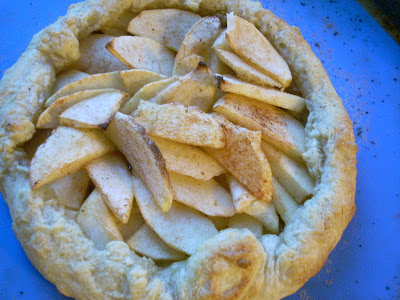 Ingredients:
1 sheet puff pastry dough, thawed
2 apples, thinly sliced
1/2 cup ground almonds
cinnamon
nutmeg
2 tbsp sugar
Directions:
Preheat oven to 400 degrees.
Roll out the thawed puff pastry dough to either a rectangle or circle.  Sprinkle the ground almonds on the dough, leaving about 1/4 inch on each side of the rectangle (or around the circumference of the circle).  Sprinkle 1 tbsp of sugar over the almonds.
In a bowl, mix together the sliced apples and spices.  Mix well to coat.  Spread the apples evenly out onto the dough.  Try to only make one layer.  Sprinkle with the remaining sugar. 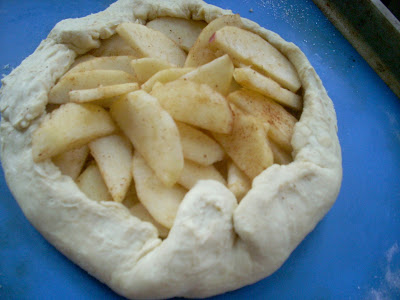 Bake for 20-25 minutes, until the puff pastry has browned.  You may have some trouble with the bottom being baked through due to the apples.  If you have this, bake for an additional 5-10 minutes with the tart on cooling rack to allow the heat to circulate better.

Serve warm with ice cream.
Posted by Tip Top Shape at 10:20 AM

Email ThisBlogThis!Share to TwitterShare to FacebookShare to Pinterest
Labels: desserts